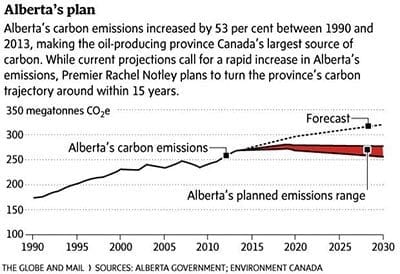 There are no hard carbon targets, but under the plan, Alberta’s carbon emissions will begin to fall under today’s levels by 2030.

The government promised the moves would be revenue-neutral, and all money would be reinvested in the province on such things as new technology to fight pollution and into a new “adjustment fund” to help affected families and businesses deal with the changes.

Alberta’s climate-change strategy was released only hours before Ms. Notley was set to meet with Canada’s other premiers and Prime Minister Justin Trudeau in Ottawa on Monday. Mr. Trudeau and most of the premiers will be headed to Paris for the summit. “Alberta is showing leadership on one of the world’s biggest problems, and doing our part,” Ms. Notley said in statement.

Ms. Notley’s six-month-old government says the lack of a wide-ranging climate policy has hampered the province’s energy industry as it has tried to persuade the United States and other trading partners to accept more shipments of crude from the oil sands.

Indeed, U.S. President Barack Obama said early this month that his country’s efforts to battle climate change would be tarnished by approving TransCanada Corp.’s Keystone XL pipeline that would ship Alberta oil to Texas refineries. He rejected it after seven years of review.

The energy sector had warned that any onerous new costs would be disastrous for an industry under severe financial pressure due to the collapse in crude oil prices.

“The framework announced will allow ongoing innovation and technology investment in the oil and natural gas sector. In this way, we will do our part to address climate change while protecting jobs and industry competitiveness in Alberta,” Mr. Edwards said in a statement.

– A cap of 100 megatonnes on carbon emissions from the oil-sands sector, which had been Canada’s fastest-growing source of emissions, once new rules are adopted. It currently emits 70 megatonnes annually.

– An economy-wide tax of $20 per tonne on carbon-dioxide emissions starting in 2017, rising to $30 in 2018. Equal to seven cents per litre of gasoline. The average household will see heating and transportation costs increase by $470 annually by 2018 under the new rules.

– Incentives to promote more use of renewable energy sources as well as to improve energy efficiency. The province is aiming for nearly a third of its power to be generated from renewables such as wind and solar power by 2030.

The NDP devised the new strategy with data from research conducted by a panel it appointed, led by University of Alberta economist Andrew Leach.

Catherine McKenna, federal Minister of Environment and Climate Change: “This is a strong, positive step in the right direction. We want to send a clear signal to Canadians and our partners around the world that Canada is back and ready to play our part … Alberta is taking a leadership position on phasing out coal, and as Minister of Environment and Climate Change, I will be looking at ways to help accelerate the reduction of coal power right across the country.

Al Gore, former U.S. vice-president and global climate activist:“Today’s announcement by Premier Notley that Alberta will put an economy-wide price on carbon, phase out coal and increase its commitment to renewable energy and energy efficiency represents an inspiring addition to the legacy of leadership and forward thinking action by Canadian provinces to speed our transition to a low carbon economy.”

Tim McMillan, President of the Canadian Association of Petroleum Producers: “There are opportunities in there – as coal is phased out, natural gas has been identified as one of the major backfills. The changes to the carbon price and the cap that’s put on oil sands, the details are going to matter a lot and we’re keen to be at the table.”

Brian Ferguson, Chief Executive of oil sands producer Cenovus Energy Inc.: “It enables Alberta to be a leader, not only in climate policy, but also in technology, innovation, collaborative solutions and energy development. I believe it will lead to Albertans and Canadians receiving full value for their oil and natural gas resources, while addressing climate change.”

Kathleen Wynne, Premier of Ontario: “Alberta’s new climate strategy, combined with a new federal government that is a true climate change partner for the provinces and territories, positions Canada to enter the Paris conference with a united voice. This unity is a departure from the past.”

Mike Hudema, climate and energy campaigner for Greenpeace:“These policies are important first steps, but much bigger emission reductions will be needed for Alberta to do its part to keep global warming below two degrees Celsius.”