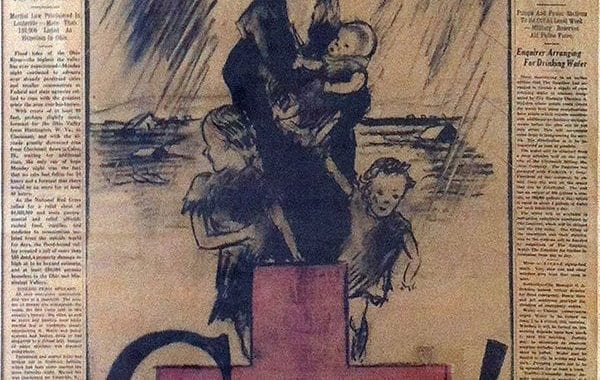 “After unprecedented precipitation, the Ohio River in Cincinnati rose to its all-time high on Jan. 26, 1937. It was a natural disaster than spanned the entire length of the 981-mile-long river. Michael Nyerges.” Read more.

One of the founders of our agency, Edmund Strauchen, did the above illustration for the Enquirer that day.

Martial Law Proclaimed In Louisville – More Than 103,00 Listed As Homeless In Ohio

With crests of at least 80 feet; perhaps slightly more, forecast for the Ohio Valley from Huntington, W. Va., to Cincinnati, and with the already greatly distressed area from Cincinnati down to Cairo, Ill., waiting for additional rises, the only ray of hope Monday night was the fact that no rain had fallen for 24 hours and a forecast that there would be no more for at least 48 hours.